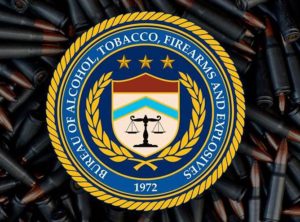 Alcohol and tobacco are generally considered taxed in a special category known as a sin tax, so its quite odd that firearms, a precursor to an armed militia as spelled out in the 2nd amendment of the Bill of Rights would be included in their jurisdiction- we we asked our self, how did these two seemingly unrelated things end up regulated by the same government authority? and whats the extent of their authority?

The ATF could be more accurately be the called the AFTAE (alcohol, tobacco, firearms, arson and explosives.)

Duties of the ATF

Alcohol, tobacco, firearms and explosives — seems like a normal day in Conroe honestly.

Most people know about the ATF’s history in the enforcement of firearms, in fact the AFT is the organisation that licences firearm sales since the implementation of the The federal Gun Control Act. The AFT is responsible for enforcing all federal firearms laws, including things like the well known Brady Act, which is the federal law that requires gun dealers to require background checks before firearm sales.

The Brady Handgun Violence Prevention Act- Is named after a national Hero James Brady who stopped the assassination attempt of Ronald Reagan by sacrificing him self.

In 2003 the bureau of Alcohol, Tobacco and Firearms had the previously mentioned expansion into explosives and arson, ATF would be responsible for a mass terror attack by IED much in the way the  National Highway Traffic Safety Administration would be for a large scale public transport accident.  The ATF also investigates crime scenes, such as that of the Mandalay bay shooting, in order to detect the use of the materials used.  This information can lead

They would serve to act as a point of records, sharing with other branches of law enforcement records of sale and storage, import/export records, database management for people suspected of suspicious behavior. ]

Though less prominent these days, the ATF is still actively engaged in the enforcement of alcohol and tobacco laws. For example, organized crime groups engage in buttlegging, which is the illegal transport of cigarettes from a state with a low tax rate to a state with a high tax rate in order to resell the cigarettes on the black market. It’s an attractive type of crime because states each set their own tax rates on cigarettes. As a result, one truckload of trafficked cigarettes can lead to a profit of $2 million when resold in another state.

The ATF is a valuable resource and continues to support the people of Montgomery County in their refusial to accept lawlesness our County.