It’s Labor Day, and while that means a day off work for most of us, the boys in blue are going to be pulling double shifts in the name of roadway safety.

Starting Thursday, May 24, 2018, and continuing through September 3, 2018, the Montgomery County District Attorney’s office, in concert with both state and local law enforcement agencies, will increase No Refusal Operations on the roads of Montgomery County. The goal of this initiative is to prevent boating and traffic-related crashes and deaths caused by impaired drivers during the upcoming summer season – the roughly 100 days between Memorial Day and Labor Day when alcohol and drug-related crashes and fatalities are on the rise 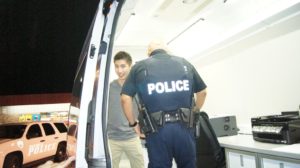 During this time period, the District Attorney’s office will provide access to prosecutors, nurses, and investigators at various locations throughout the county and on the Lake to assist law enforcement in obtaining blood evidence in cases were a DWI/BWI suspect refuses to provide a sample for testing. The process is simple but effective:

In 2016, 3,773 people died on Texas roadways; 987 of those were in crashes where a driver was under the influence of drugs or alcohol, and 455 deaths were the result of distracted driving.
In 2016, 265,076 people were injured in Texas motor vehicle crashes.
Montgomery County, Texas, has the highest fatality rate in the state for counties with over 500,000 residents.
Each year in Montgomery County, there is on average 60 fatal crashes. Of those fatal crashes, more than half occur because a driver is intoxicated on drugs or alcohol. And of the alcohol/drug related fatalities, more than 50% of the time, the intoxicated driver kills themselves in a single car crash.
In 2016, the average Blood Alcohol Concentration (BAC) for those DWI suspects arrested in Montgomery County where a blood search warrant was obtained was 0.18, over double the legal limit.
In 2016, 751 blood search warrants were obtained in DWI cases in Montgomery County.
After being arrested for DWI, a person can spend on average $12,000.00 in attorney’s fees, driver’s license suspensions, and fines and court costs.
Source: Montgomery County District Attorney’s Office, Vehicular Crimes Division – “100 Deadliest Days of Summer”